Home Play One Kind Of Science Musical: Kindness And Science Come Together In The... 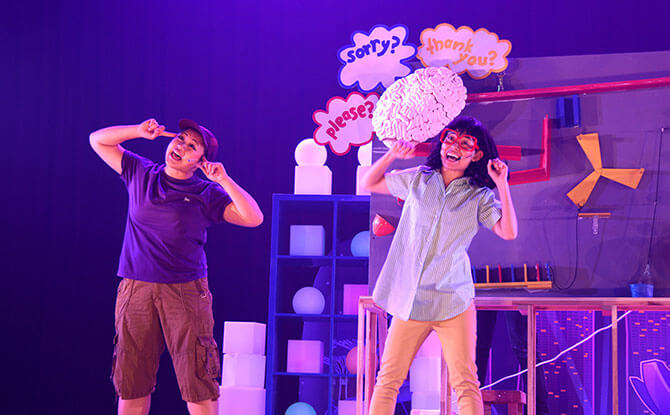 The KidsSTOP musical features its five mascots – Jo, Max, Pepper, Win and Belle – along with the Kindness Cubbies heading outdoors on an adventure of a lifetime.

The production aims to illustrate the importance of kindness and its positive impact on a person’s mental, physical and emotional well-being. Science concepts about kindness will be brought across in a light-hearted manner through specially commissioned songs, dance numbers and light effects.

Singa, the well-known lion mascot of the Singapore Kindness Movement, will also be making an appearance during the One Kind of Science Musical.

The musical is produced by Players Theatre, the children’s theatre company behind productions such as Roald Dahl’s The Witches and The Three Little Pigs. Players Theatre is helmed by Artistic Director Carina Hales.

The KidsSTOP musical is targeted at children aged 8 years old and under. This is the first time that Science Centre Singapore is presenting a musical for young children and their families.

Dr. William Wan, General Secretary of Singapore Kindness Movement, said, “From our surveys, we are encouraged to learn that Singaporeans have an inner desire to be kind to each other and they too aspire their next generations to be kind and gracious. Our partnership with Science Centre Singapore provides opportunities for parents to bond with their children and teach them about life’s most important values. Through the musical, we hope families will place greater emphasis on learning these social values for the betterment of society.”

One Kind of Science Musical will run from 28 September to 6 October 2018 at the Annexe Hall 1, Science Centre Singapore. It is being held in conjunction with the Singapore Kindness Movement’s 21st anniversary and the Young Learners Festival 2018.

Tickets are priced at $25, excluding booking fees, and available from SISTIC.