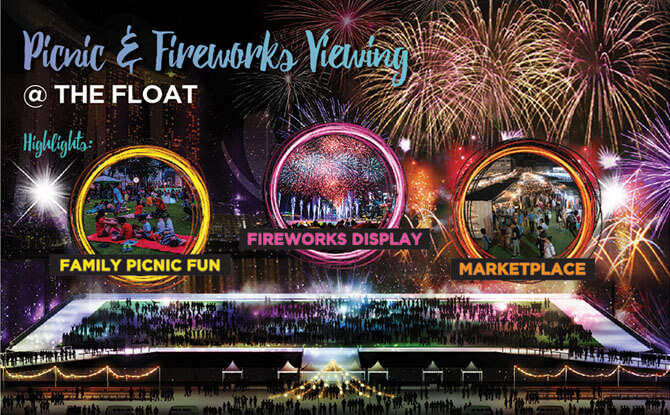 The festivities for Marina Bay Singapore Countdown 2018 have started! From a charity trail to carnival rides and free music performances, the public can enjoy a range of activities at Marina Bay throughout December.

Presented by the Urban Redevelopment Authority (URA), Marina Bay Singapore Countdown 2018 will feature a myriad of activities and programmes at various public spaces around Marina Bay and the Civic District, bringing everyone together in the heart of our city to usher in the New Year.

Bay of Hopes and Dreams
The MBSC Charity Trail lets the public explore the precinct and have a chance to give back to the community.

From 10 December, the public can download the digital self-guided trail on smartphone application “LocoMole” to explore various hotspots around Marina Bay, including attractions such as The Fullerton Hotel Singapore, Esplanade – Theatres on the Bay, ArtScience Museum, the Merlion Park and Youth Olympic Park.

There will be sculptures at 10 of these hotspots that participants can scan to unlock mystery gifts, including credits for the Prudential Marina Bay Carnival, vouchers and discounts at participating retailers. Participants who scan all 10 sculptures will also be able to enter a lucky draw and stand a chance to win $2,018 worth of Prudential Marina Bay Carnival credits or a pair of return tickets to Tokyo. There will also be light-hearted games and activities for participants to take part in via the application.

In the spirit of giving, the stakeholders have adopted charities, which participants of the MBSC Charity Trail can support by making a donation or signing up as a volunteer at the charity organisations.

Something for Everyone at Public Spaces Around Marina Bay and Civic District
The public spaces around Marina Bay will also host a series of programmes for the public to enjoy in the lead-up to the Marina Bay Singapore Countdown.

The Prudential Marina Bay Carnival will open its doors from 15 December 2017 till 1 April 2018 at The Promontory and Bayfront Event Space.

Along the waterfront promenade outside the Red Dot Design Museum, the Market of Artists and Designers will be held for the first time at Marina Bay every Friday to Sunday, from today till 1 April 2018. The public can indulge in some festive shopping with the artisanal products on sale at the marketplace.

Throughout the month, the public can also participate in Celebrate December, a series of free programmes organised by Esplanade – Theatres on the Bay at the Esplanade Concourse and Outdoor Theatre. Music lovers and families can look forward to enjoying free music performances, roving acts and craft activities. Visit www.esplanade.com/celebratedecember for more details on the programmes.