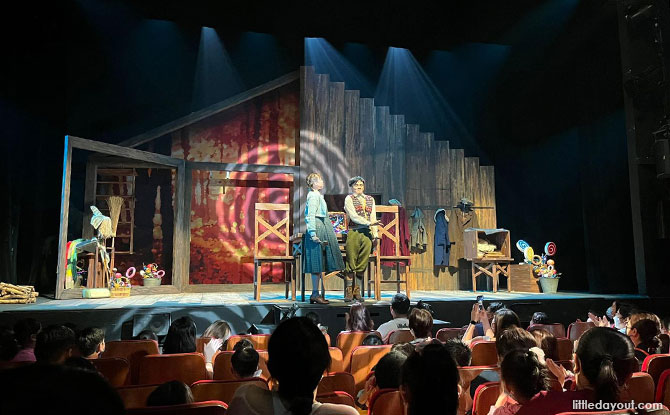 Gretel (Sharon Sum) is threatened by her brother Hansel (Jayden Lim Jun De)’s existence in her life but when their parents abandon the children in the eerie dark forest, she has to learn to work together with him and join forces to outsmart the witch who is intent on having them for supper. Thus goes the story of SRT The Little Company’s Gretel and Hansel’s “Adventures in the Candyhouse”.

A decidedly different look at an age-old familiar story, this 50-minute production offers lessons about positive traits such as self-awareness and sibling-love.

First staged in English in 2019, this play in Mandarin is directed by Thong Pei Qin, supported with creative set design by Petrina Dawn Tan, colourful costumes by Leonard Augustine Choo and dramatic lighting effects and design by Gabriel Chan and Faith Liu, with effective soundscape by Stan x Soap.

As dramatic and animated storytellers of their own tale, Gretel and Hansel have been solidly cast with two very expressive actors who were constantly moving around  and playing different roles through the skilful manipulation of costumes and props.

The build-up of the love-hate dynamics and chemistry between this high-spirited excitable dramatic brother and sister duo engaged  the audience into a new imaginative world.  Their deft play with props and sets to recreate other characters, a cage and a witch’s silhouette for instance, was a hit with the kids.

The play never takes itself too seriously with a somewhat feminist ethos – no wicked stepmother with the story mostly narrated from big sister Gretel’s perspective. It starts as a tale of a young girl who wants to live her own life  and undergoes an emotional  journey to learn the precious value of sibling love, given the common trend of female agency and power in Disney’s offerings these days. The direction handled this lightly and approached the story by poking fun at it with wit and insight.

While recommended for 4-year-olds and above, there were some Chinese phrases that flew over our heads but given the familiar story, this was not a big issue. By taking a different road to the same station, the narrative journey changes your perspective. We did wish there were some songs or more interactive segments with the audience, while the usual singing and dancing musical numbers were not crucial, perhaps at least one catchy tune might have provided an entertaining takeaway.

Love and Bravery Change Everything 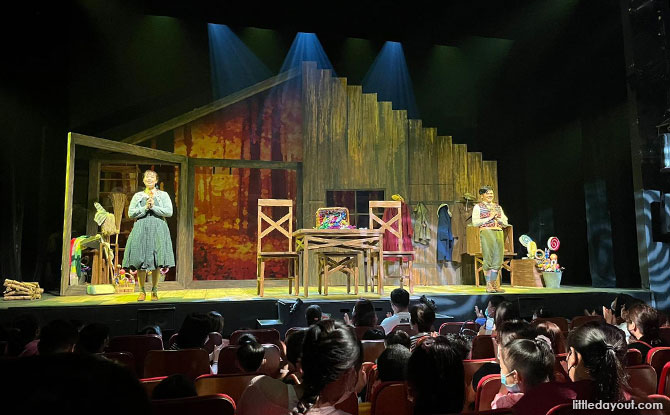 The bickering siblings’ relationship was lively and fun given the good chemistry between the cast. Our kids thought we had an ulterior motive for taking them to this show as “Gretel and Hansel are as dramatic as us when we fight!”

Fairytale land usually focuses on the moral and message of story and ultimately, doing what is right after getting lost and losing one’s way, by being loyal and brave win the day.

Through the play’s better-drawn characters, there was more empathy for the two characters, whether competing for parental attention or asking the audience to help them find their way back to each other.

Gretel’s monologue was rather long about getting mad with our sibling over the large and small stuff, self-doubt and whether life would be simpler without human or wicked obstacles.  While serving a turning point to  pave the way for growth in character, she could have shown more through actions.

Instead of taking a darker turn harkening back to the very first 1812 edition of the Brothers Grimms’ tales, the play did not go down that route!

Usually the climax of the story, the witch’s death was a Sonic speedy version of cooking the witch in the blink of an eye but my daughter said this made her like Gretel all the more for her muscle power!

Younger children may feel apprehensive as the illumination of light and shadow created the witch’s silhouette looming large over Gretel and Hansel.

My primary schoolers felt that the scariest moment in the play was when the parents left the kids and the siblings were separated from each other in the deep dark forest with looming trees and its eerie ambient sounds of ominous crows,  owls and wolves.

Children’s fears of abandonment and separation are very real but in the context of this light-hearted children’s play,  the exploration of trauma and emotional struggle was redirected instead to Gretel deciding whether she should save her brother from the woods and the witch, and whether she would overcome fear and sibling jealousy in the end.

The verdict? A show packed with energy: funny, fun and feel-good fast-paced ride, which we enjoyed. It was nice to experience the charm and magic of live theatre. My two primary schoolers loved the idea that the tale was now re-told by two empowered children who were able to bring their imagination to life and draw the audience in.

Furthermore, there was a character development lesson to be found in this tale: Gretel demonstrated courage and love for her baby brother despite her inner conflict, giving way finally to strength of character.

This Chinese production runs from 27 July 2022 at KC Arts Centre – Home of SRT.