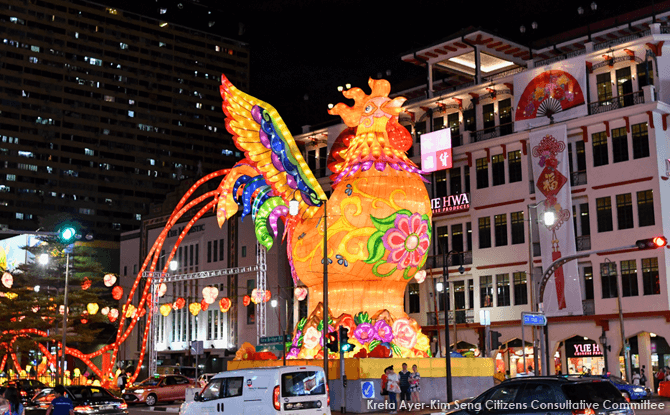 Chinatown is all set to welcome in the Year of the Rooster. With the Chinatown Chinese New Year Celebrations 2017 officially kicking off on Saturday, 7 January, this year’s festivities will see the introduction of new programmes alongside mainstays such as the light-up, nightly stage shows and festive bazaar.

“The Chinese New Year Celebrations at Chinatown has always been an excellent showcase of the precinct’s mix of heritage and dynamism, delighting locals and visitors alike with an extravaganza of lights and sounds. This year, various first time events are helping to renew traditions and further engaging the local community to foster a greater sense of affinity with Chinatown,” said Mr Kenneth Lim, Director, Cultural Precincts Development, Singapore Tourism Board

Read: Top 5 Places to Celebrate the Year of the Rooster

What to Expect at Chinatown Chinese New Year Celebrations 2017

Wondering what is new and what you can expect on a visit to Chinatown? We take look at the some of the highlights, both traditional and new, at the Chinatown Chinese New Year Celebration 2017,

1. Record Number of Lanterns On Display 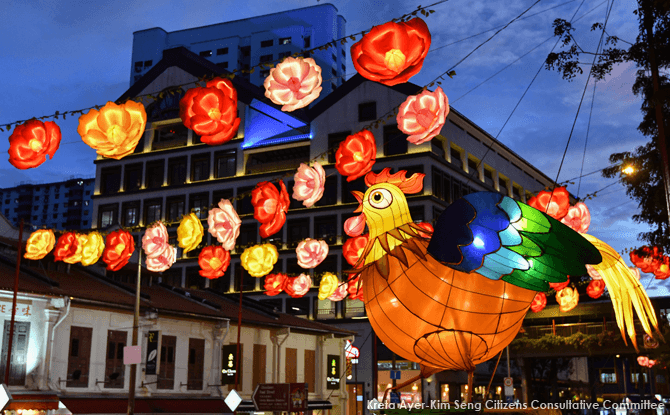 This year’s Chinatown Light-up will mark the Year of the Rooster with about 5,500 handcrafted lanterns – the largest number of lanterns that have gone on display for the celebrations. The displays are the handiwork of 40 master craftsmen in collaboration with students from Singapore University of Technology and Design. Starting from 7 January till 25 February, the lanterns will be lit up from 7 pm till late night and overnight on 27 and 28 January. And just in case you are wondering about the electricity bills, the lanterns are fitted with environmentally friendly LED lights.

2. There is a Digital Wall of Huat!

Designed by the students from Singapore University of Technology and Design, a new tech-enabled “Huat Greetings Wall” will be available at the Garden Bridge (next to People’s Park Complex) for the public to send festive greetings and well wishes. Head over to chinatownfestivals.sg/huatgreetings to enter your message.

3. Learn From A Rooster’s Tale 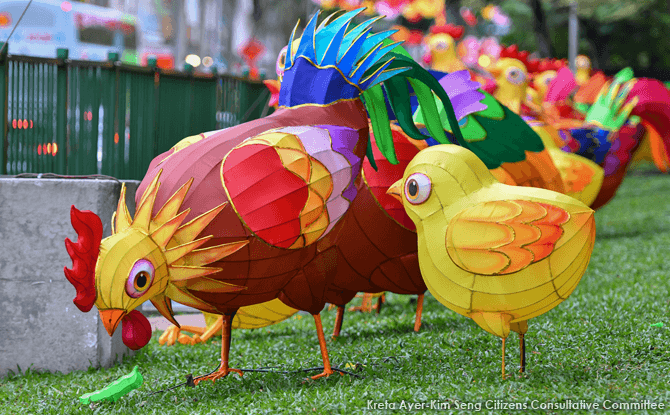 This year’s street Light-up has been designed to illustrate the life of a rooster and the values associated with it. Peer at the lanterns along the centre divider between New Bridge Road and Eu Tong Sen Street and see if you can spot scenes that depict values such as “the early bird catches the worm” (早起的鸟儿有虫吃) and “filial piety” (孝顺) where a chick is feeding a worm to its parent.

There are total of 55 roosters, 64 hens and 134 chicks in the display along New Bridge Road and Eu Tong Sen. This includes the 13 m tall Rooster lantern at the junction of Eu Tong Sen Street and Upper Cross Street. 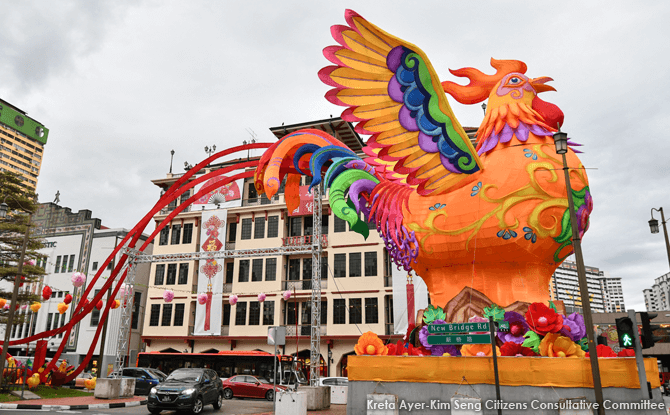 4. Savour Unique Eats Alongside Traditional Goodies at the Festive Bazaar 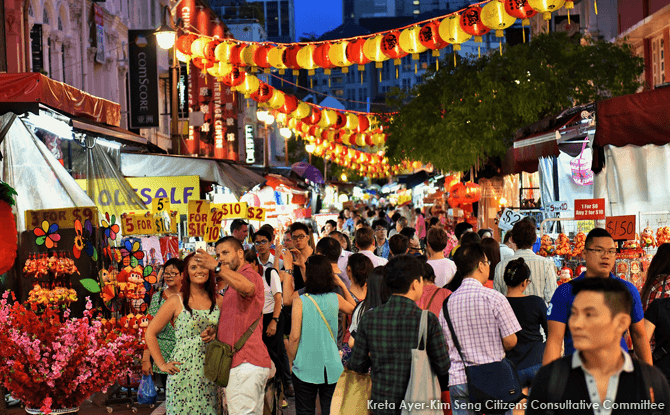 440 stalls will line at Pagoda Street, Smith Steet, Sago Street, Temple Street and Trengganu Street as part of the Festive Street Bazaar. Open from 6 pm to 10.30 pm from 6 to 27 January and till 1 am on Chinese New Year’s Eve, it is the perfect place to stock up on those Chinese New Year munchies.

New this year is a section called YouthEATS @ Temple Street. 12 entrepreneurs, including youths, will be serving up festive bites such as braised duck Shabu Burger and Lucky Lucky Money Balls (meatballs with gooey melted cheese).

5. Record Number of Teams Will Duke It Out at the Lion Dance Competition 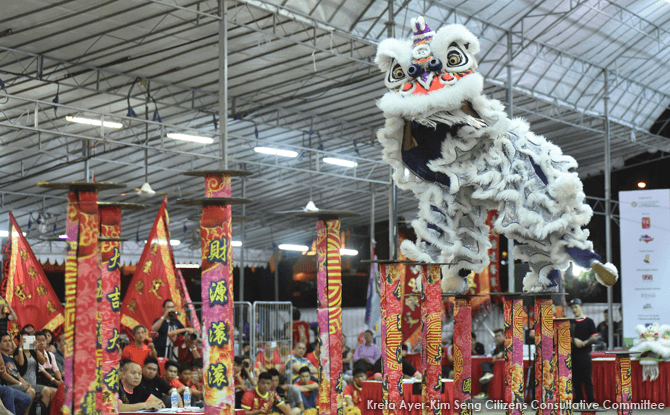 Now into its 10th year, the International Lion Dance Competition has attracted participation from top troupes from all over the region. New to the competition this year are teams from Australia and Macau. This brings the total number of teams competing for the title of “King of the Lions” to 17.

The Lion Dance face-off takes place on 14 and 15 January and if you want to see these skilled artistes in action, be sure to get your tickets early – tickets sell out each year!

6. Get a Different View of Chinatown from a Rooftop Flea Market

See Chinatown from the rooftop of People’s Park Complex while browsing through the offering of over 100 curated local brands and designers at the YHFLEA: Come Lepark market. Being held on 14 and 15 January 2017 from noon till 8 pm, shop for locally-made and pre-loved items while being entertained by music performances and graffiti art.

7. It is Good to be a Rooster at the Chinatown Heritage Centre 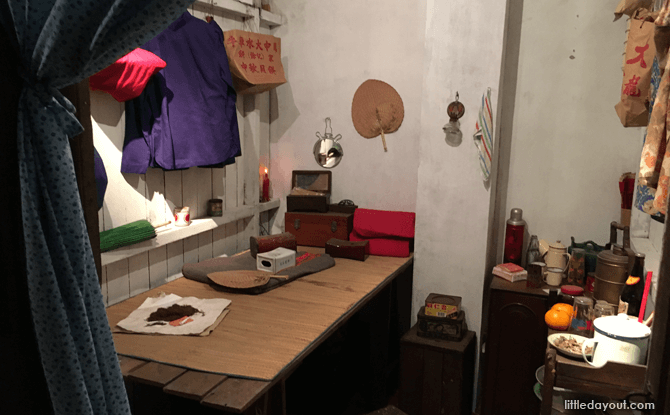 We really like the Chinatown Heritage Centre (read more about it here) and if you are visiting Chinatown during this Chinese New Year period, be sure to stop by the Centre. Those born in the Year of the Rooster will enjoy free admission to the Chinatown Heritage Centre. You can also relive your schoolyard antics at the Year of the Rooster Capteh Challenge being held daily at 1 pm and 4 pm and tour a special exhibition “The Rooster Legend” at the Centre.

8. Play Five Stones for a Cause 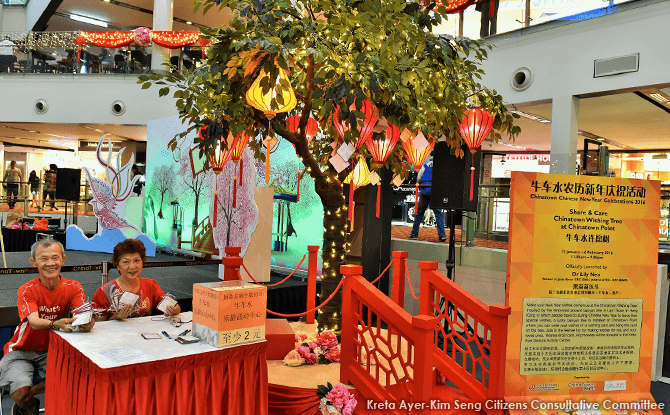 The Chinatown Wishing Tree at Chinatown Point is back at the Chinatown Chinese New Year Celebrations 2017. This year, in addition to purchasing a “Make a Wish” card for $2, you can also purchase a set of “Rooster” five stones” which has been specially handmade by Chinatown Social Enterprise. Each set costs $10 and all proceeds going to the Kreta Ayer Senior’s Activity Centre.

Read: Top 5 Places to Celebrate the Year of the Rooster