Singapore Art Museum’s Art Garden 2013 aims to capture the imagination of both children and parents through contemporary art. This exhibition, being held from 17 May to 1 September 2013 in conjunction with Children’s Season 2013, conjures up an immersive world where children can not only view, but even touch and interact with the exhibits.

Step Into the Garden

Spread over 4 floors of SAM at 8Q are 7 art installations and a movie screening room that features a selection of short films.

There are also the ever-popular craft stations for children throughout the museum. Some of these activities allow kids to see their own creations as part of the installation while others let children step into the shoes of the artist and experience what goes into the making of the installation.

Here is a run down of what you can expect to find this Children’s Season 2013 instalment of the Art Garden at the SAM at 8Q.

Created by artist Sandra Lee, this installation brings an Asian twist to well-known fairy tales. Spot Little Red Riding Hood with a basket of ang ku kueh, an Indian Rapunzel and the Old Woman that lived in a Chinese shoe.

These are but some of the many fairy tales that line the wall of the installation and you will also find many references created by the artist in tribute to Singapore. See if you can spot the Esplanade disguised (as what else but a durian), and treehouses that look suspiciously like HDB flats. Even the title of the installation, The Enchanted Garden City is in reference to Singapore’s status as a green city.

Within the installation, children can create their own drawings and have it appear on the Magic Mirror. Activity sheets are also on hand for adventurers to hunt for little treasures among the incredible details of The Enchanted Garden City.

There is a bridge straight out of the Billy Goats Gruff that children can play on that has been delightfully decorated with fluffy white sheep clouds. If you are looking for the Troll that guards the bridge, sneak under the bridge and you may be in for a surprise.

Around the day in eighty worlds

This installation on the second floor explores how far a child’s imagination can run. It is almost whimsical in nature with many tactile elements for kids to explore.

Before stepping into the checkered area, take a moment to appreciate the room from the outside. From the right vantage point you will see magically see a cat’s head come into view, made up of the archway and the room’s interior fittings. This reflects the intent of the artist, Vicente Delgado, to challenge visitors to re-examine the familiar.

See if you can spot references to everyday objects within the installation, including HDB grills.

At Around the day in eighty worlds, kids can get busy creating their very own kaleidoscope at a craft table just outside the main installation. Once assembled, these make a brilliant “looking glass” that can be used within the installation to stretch their imagination.

At the other end of the second floor is a screening room where young and old alike can sit down to enjoy a selection of short local films and animations. These short films range from 2 to 12 minutes in length each. It takes about an hour to view the entire set of films.

Contributed by students from the local polytechnics, universities and institutions, they provide easily digestible, family-friendly entertainment snippets that kids are sure to lap up. Among them is also a SAM-commission work, Little Secret by Tan Siang Yu, that provides a light-hearted look at 2 kids trying to keep a secret from their parents.

Created by French multimedia artist Stephane Blanquet, Glossy Dreams in Depths explores the feelings of being confronted with unfamiliar and even frightening situations, and being able to overcome them.

It starts off innocently enough in a child’s bedroom. However, the bed swivels 180 degrees on a turnstile to transport them instantly to another world.

Through the use of 3D images, 3D wallpaper (you have to don the 3D glasses provided for full effect) and holographic images, visitors are thrown into a world inspired by nightmares and bad dreams. However, as visitors make their way along the installation, there is a gradual unveiling of the senses, metaphorically representing how fears can be overcome and conquered.

Don’t miss out on the mask-making activity at the other end of the room.

Inspired by the Lascaux Caves in France, this installation invites viewers to reimagine the natural world.

Using an estimated 35km of thread, fantastic pre-historic scenes of wild animals have been created in the darkened room. The installation was created by wrapping thread around individual metal screws. The screws represent stars in the night’s sky and under the luminous glow of the installation, children can literally see how some imagination to “join the dots” can lead to new creations.

The exhibition does not just end in the “cave”. Behind a curtain at the far end of the room is another where kids can try “joining the dots” themselves. They can string together their own miniature masterpieces using the same technique used by the artist and 11 other assistants to create the Stellar Cave II.

After visiting prehistoric at Stella Cave II, visitors can step into the ultra-modern installation The Incredibly Magical Expanding Room. If you hear screams and shouts emanating from behind the curtain, it is because kids are encouraged ballyhoo into a microphone to see the effect their voices have on the graphics projected on the surrounding walls.

Four sets of graphics are used and these range from dots to lines. Deliberately choosing simple geometric shapes, the artist, Mojoko, explained that this is to “let the kids fill in the blanks.”

The Incredibly Magical Expanding Room makes a perfect companion installation to the Stella Cave II. Both these installations demonstrate that whether in prehistoric times or through modern technology, mankind has always had the capacity to create and conceptualise new ideas from the abstract.

The highest floor of the SAM at 8Q houses the LOVE. REVOLVE THE WORLD, an installation by Sun Yu-li. This community art project was created between March to May 2013 with the aid of children aged 3 to 12 years old.

To start, the artist sketched out only white lines and dots on 750 blank, black canvases. The dots represent meeting points and the lines are passages between the various meeting points.

The canvases were brought to children at various pre- and primary schools around Singapore where they were given the liberty to fill in the spaces between the lines. From there, the children’s individual and collective creativity took over.

If you look at the top left corner of the far wall, you will see a canvas painted blue. According to the artist, this was done by a child who wanted to replicate the act of spreading peanut butter on his bread every morning.

As the children worked in groups, they would also look across to their neighbour’s piece and try to imagine how their own canvas would fit in with the work of others.

The music playing at the gallery was also played for the students; stirring their imagination as they went about their painting their allocated canvasses.

See if you can imagine what the children were thinking of when they created their mini-masterpieces.

LANDscape in the BOX

Situated outdoors at the entrance to SAM at 8Q is a collaborative project, LANDscape in the BOX, between the Singapore Art Museum and the National University of Singapore (NUS) Architecture Department.

Comprising 134 individual boxes, each box captures how a person perceives Singapore. Collectively, they represent a vision of the Singapore landscape. If you look closely, you will be able to spot references to places around Singapore including the Chinese Garden and even old godowns.

Admission is free for Singapore Citizens, Permanent Residents and children aged 6 and below. Otherwise, it is S$10.00 for adults and S$5 for students and seniors above the age of 60 years old. 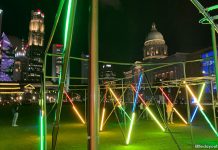 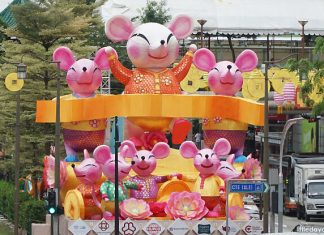