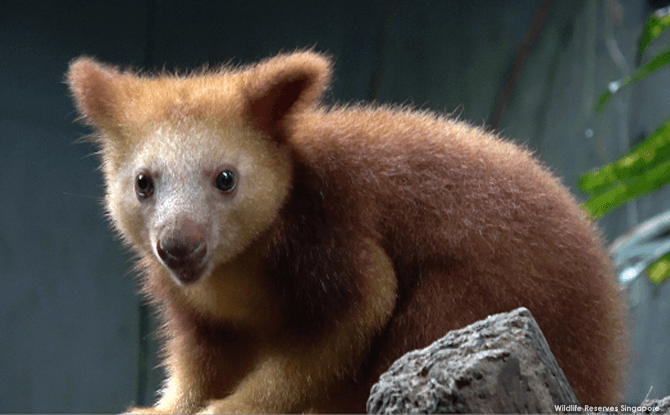 Very soon, lucky visitors to Singapore Zoo may be able to see a young female Goodfellow’s tree kangaroo joey at the Australasia zone.

The yet-to-be-named joey is the offspring of Toea and Blue who can be found at the outdoor exhibit area of the Australasia zone.

The baby Goodfellow’s tree kangaroo was born between July and August last year. At that time, she was jellybean-sized and, like all marsupials, she lived in her mother’s pouch.

It was only in January this year that she peeking out her hairless head from Blue’s pouch.

As she approaches her first birthday, she has grown to become more confident about exploring life outside her mother’s pouch. She has been more frequently leaving the pouch to practise her climbing and jumping skills. Although she occasionally returns to Blue’s pouch for milk, she has also been eating fruit and vegetables such as brinjals, corn, long beans, carrots and kang kong.

Singapore Zoo is part of the Global Species Management Plan (GSMP) for the Goodfellow’s tree kangaroo. This species of tree kangaroo is classified as endangered under the IUCN Red List of Threatened Species with its population dwindling by about 50 per cent over the last 50 years.

Under the GSMP, participating zoos from Australia, Europe, North America, Japan and Singapore hold assurance populations to protect the animal species in the event of a catastrophic reduction of the animals in the wild.

With the birth of the new tree kangaroo joey, Singapore Zoo now holds five of the approximately 50 Goodfellow’s tree kangaroos under human care.

Blue and her baby joey are currently being conditioned to get used to the outdoor habitat at the Australasia zone together and will be displayed there throughout the day once fully comfortable.