Home Play Snoopy In Space: Going Where No Beagle Has Gone Before 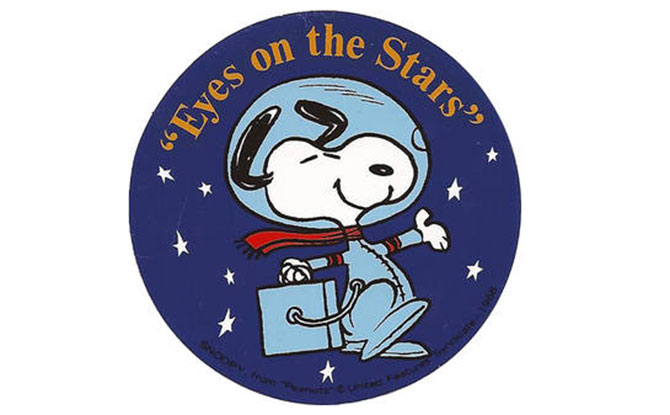 Snoopy is known for his role as a World War I Flying Ace where he goes up against the Red Baron in the Peanuts cartoon strip but the world-famous beagle also has a very real role in the NASA space programme.

The Beagle in Orbit

In May 1969, the Apollo 10 space mission was launched. This was a “dress rehearsal” for the lunar landing which was eventually accomplished on 20 July 1969. On the Apollo 10 mission, the Lunar Module was known as Snoopy while the Command/Service Module was Charlie Brown.

During the space flight, Snoopy almost had a disaster when it was sent into an unintended roll after it had undocked from Charlie Brown. However, the astronauts were able to recover from the roll and redock it safely. Eventually, the Snoopy lunar module was jettisoned to orbit the sun while the Command Module returned to earth. Recently, it was thought to have been located in space, still orbiting the Sun.

However, the orbiting lunar module from 1969 is not the only association between Snoopy and the NASA space programme.

NASA has a Silver Snoopy Award which is given to employees and contractors in “recognition for outstanding contributions toward achieving organizational objectives in support of the Space Flight Awareness (SFA) Program.”

The award consists of a pin that has been flown in space and is presented by an astronaut. A maximum of 1% of the workforce can receive the Silver Snoopy Award in any given year and the person’s job performance must contributed significantly to human flight safety or mission success.

Charles M. Schulz was an avid supporter of the US space program and drew up the image for the Silver Snoopy Award himself.

Snoopy and the Peanut’s Gang’s association with NASA and space continues till today.

The brand new Apple TV+ streaming service will be launching an educational show Snoopy in Space. This follows Snoopy and Woodstock as they go about fulfilling their astronaut dreams. It is a STEM-focused series, created in collaboration with NASA, and aimed as sparking an interest in space exploration amongst students.

Unfortunately, there is no confirmation if Apple TV+ will be available in Singapore after its launch in the US in fall 2019.

In the meanwhile, we can still enjoy the Snoopy in Space trailer above and hope to see it in Singapore sometime soon.

There is also a To the Moon: Snoopy Soars with NASA exhibition at Science Centre Singapore as part of the Moonshot 50 exhibition.