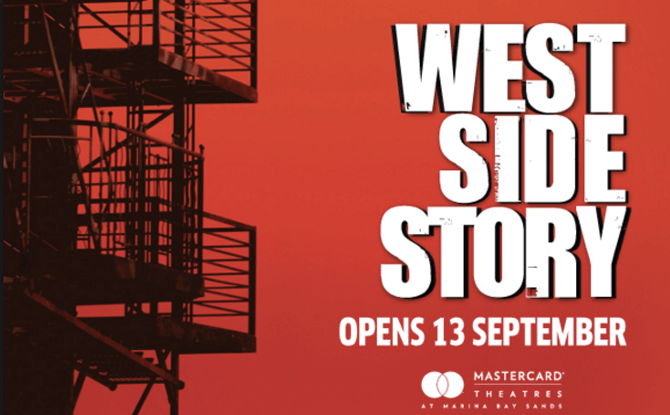 Blood and bluster. High kicks and high jinks. This energetic and polished production of West Side Story relied on its charming leads and committed ensemble cast to re-tell the familiar and perhaps well-worn story of Shakespeare’s Romeo and Juliet.

The idea of transporting the bard into 1950s New York with its rival gangs of white and Puerto Rican disaffected youth still struck me as pertinent and powerful, with its reminder of the need to find common space between individuals and communities.

Throughout the musical, the set design constantly separated: the rival camps always huddled together with miles of stage space between, emphasised by the chasm represented by the starkly projected New York cityscape.

And when they came together, it seemed only possible to clash heads and bones, no meeting possible without passions boiling over, characters chafing from unaccustomed contact.

Amidst this pattern of deep division and troubled collision, Tony and Maria meet on that balcony, the scaffolding of which suggests the tentative space for tenderness and young love.

So goes the soaring anthem of this musical. Yet the scene of the ensemble dancing in ethereal harmony mid-way came across not so much as paradisiacal but a leached out fantasy, quickly dissolving into the real blood and guts worlds of the Jets and Sharks, having been created in our imaginations through choreography and characterization.

The musical goes some way to celebrate its version of ethnicity: the robust sing-song of Puerto Rican voices, the red swishing skirts and sensuality of bare arms; the more straightforward energies of their rivals, with their working class drabness and machismo.

There was much to be delighted by, from the cheeky girls rule rendition of America to the pretty imagining of marital bliss at Maria’s bridal shop; and much to mull over: the age old question, why can’t we all just get along?

The delicacy and terrible irony of the deaths of two young lovers in Romeo and Juliet are changed in West Side Story to sheer brutality as young Tony is murdered by the enraged Chino. Perhaps that too, is a statement for our present times.

Celebrate National Day With A Samsui Dash, Hoops Wheeling & Other...