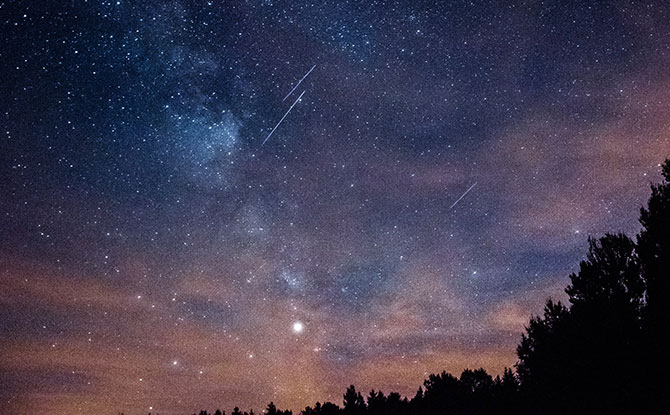 If you see a “shooting star” in the sky these few days, is probably a meteor; August is when the Perseid Meteor Shower occurs.

The annual Perseid Meteor Shower takes place from mid-July to mid-August with its peak dates being 10, 11 and 12 August.

What is the Perseid Meteor Shower?

To understand the Perseid Meteor Show, you need to first know about the Comet Swift-Tuttle.

The Comet Swift-Tuttle is a large, 26-km-wide comet which has an orbit that closely approaches the Earth. The last time is passed was in 1992 and it is not expected again until 2126.

Even though the comet has orbited away, it has left behind a trail of debris in its wake.

Once a year, the Earth collides with the comet’s dust and debris trail. Pieces of debris which enter the Earth’s atmosphere are known as meteors. They start to burn up as they descend through the air, creating a “fire ball” in the sky.

The Perseid Meteor Shower is so named because the meteors appear to originate from the constellation of Perseus in the night’s sky.

In Singapore, the Perseid Meteor Shower is difficult spot because of light pollution and our dense urban landscape. A bright moon can also obscure the meteors. According to Facebook page Stargazing Singapore, the best time to observe the meteor shower is between 4 am and 6 pm.

While there is no need for any special equipment to view the meteor show, what is needed is patience and a good dose of luck.

This year, Stargazing Singapore, who have been patiently monitoring the skies since 8 August, have already detected some meteors. However, they also noted that over the last two days, the skies have been cloudy, obscuring the full view of the sky and lowering the chances of seeing meteors.

The best observation spots are those which provide unobstructed views of the sky with little light around. These are locations typically large open fields. However, with the current dengue situation, it is not advisable to head out to such places in the pre-dawn hours of the morning.

Still, if you do happen to be out and about at night, glance upwards to the sky. Perhaps you may be one of the lucky ones to see a ball of fire shooting across the night’s sky.