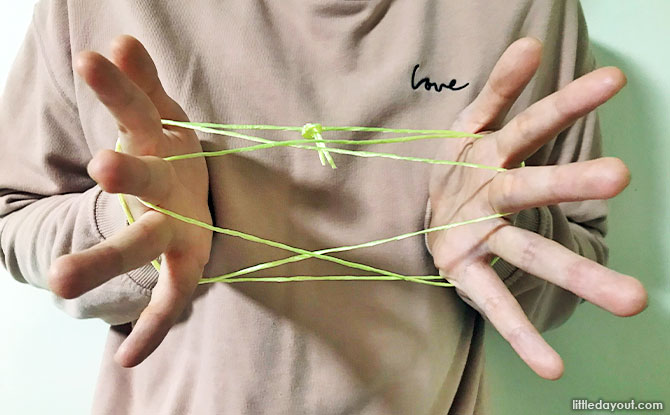 Ever heard of the Cat’s Cradle? The Cat’s Cradle string game is a game that might be familiar to many as a part of their childhood. The game is said to have originated in China and is known as fan sheng, which directly translates to “turn string”. It is a fun game that is great for rainy days.

This game is often played between two or more players. The objective of this game is to create various string figures between the fingers passing a loop of string back and forth between the players. The type of string, the specific figures, their order, and the names of the figures vary from player to player. Here is one way of playing Cat’s Cradle. 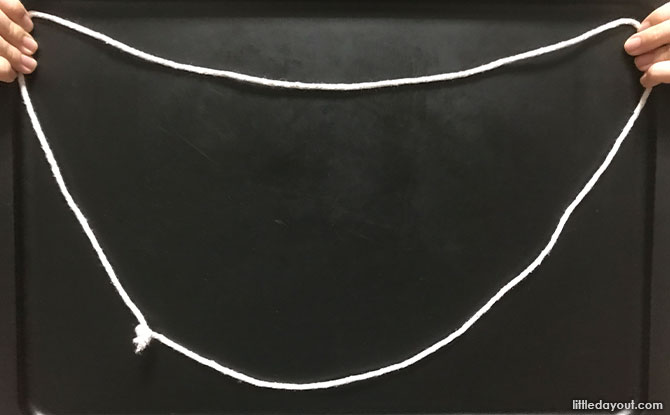 Not much material is needed other than a long piece of string that measures about 120 cm in length. This can also be done with some shoelace. Tie the string together at the ends so that it creates a circular loop.

How to play Cats Cradle

Due to the sequential nature of the game, Cat’s Cradle is best played with a partner to help form new shapes and to take the string from you at the next turn. If there are more than two players, players can pass the string around in a circle or choose a specific order to transfer the string from person to person. The game will go more smoothly if you’re playing with someone whose hands are roughly the same size as your own.

There are many different variations that you can form with the Cat’s Cradle, in this tutorial, there are the three basic shapes that you can try to form. The game ends when one player either makes a mistake or ends up with a shape that does not allow any other shape to be made. 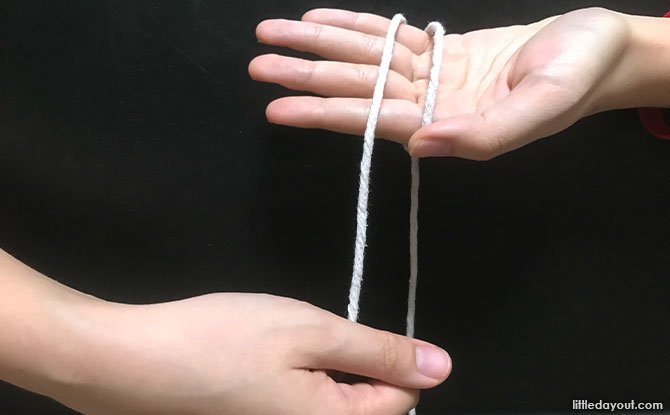 First, loop the string around the back of your hand. Let it rest just behind your knuckles. Keep your thumbs on the outside of the strands. Do the same for both hands. 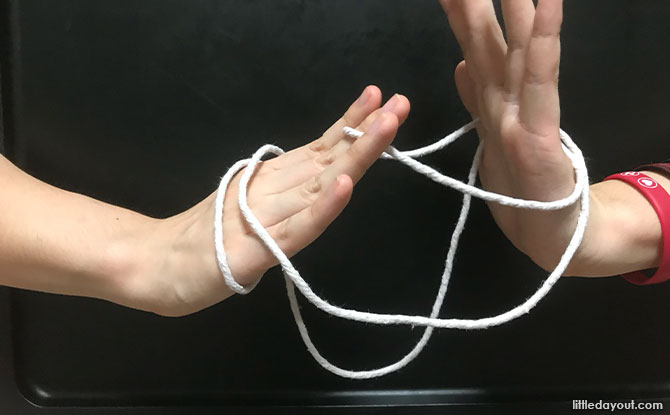 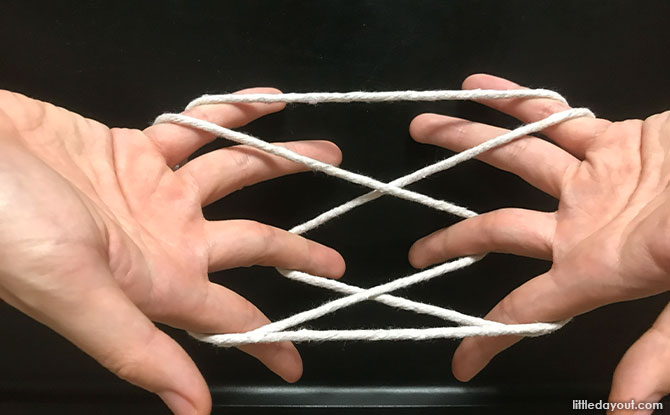 Separate the two ends and then they create two ‘Xs’ in between your hands. This is the starting shape for you to start playing the Cat’s Cradle. 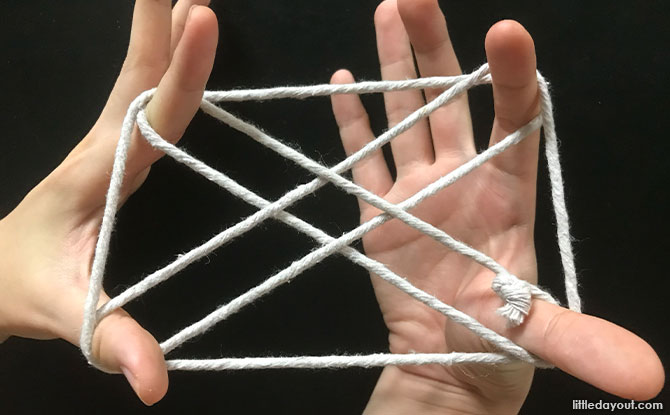 To transit the Cat’s Cradle into a Soldier’s Bed, the second player should use the thumb and forefinger of both hands to pinch the two centre ‘X’s of Cat’s Cradle. Then pull and move the ‘X’s around the outside of the bottom strands and up through the centre.

Simultaneously, the first player (who is originally holding the string) will gently slide their hands out of the string. When the second player opens up their thumb and forefinger, the resulting shape is known as Soldier’s Bed.

An inverted version of Soldier’s Bed, known as Diamonds, and can be made by moving the strands over the top of the two middle ‘X’s instead of underneath. 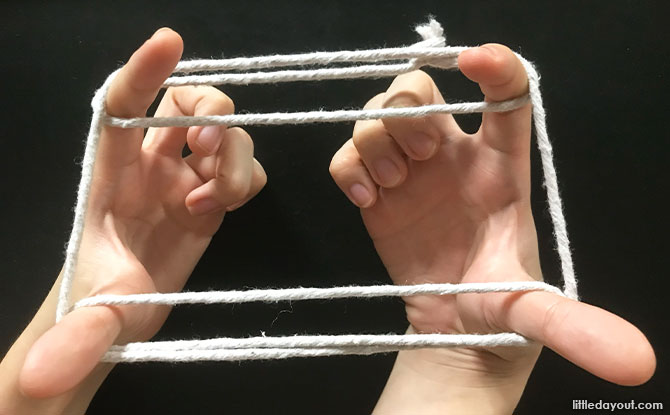 The Candle pattern has many names, such as tractor, chopsticks or mirrors. This is the next shape to transition to from the Soldier’s Bed. It is recognisable by the internal pattern of parallel lines.

Inside the Soldier’s Bed formation, use your forefinger and thumb to grab the Xs that are perpendicular. Bring these ‘X’s around the outside of the shape and up through the centre.

As your partner removes their hands, pull the string taut and spread your thumb and forefinger to form the Candle pattern. 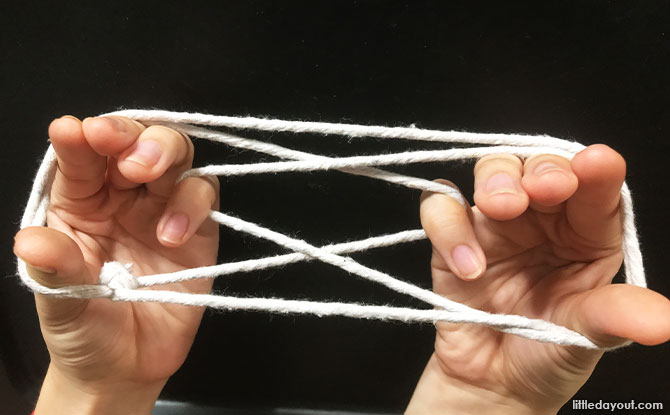 The final shape is the Manger. From the Candle pattern, use your last finger on your right hand to grab the inner string near your left side and pull it towards the right, making a triangle. Repeat with your left last finger.

Next, take both your index finger and thumbs at the same time and put them down into the triangle made by your last finger strings. Move your fingers under the outer strings and up through the centre. Open your thumb and index, while your partner releases all the strings again. Do not release the strings on your last finger during this step.

This should put you back at the first position again which is the Cat’s Cradle. Begin the cycle again by reaching in from the top to grab the Xs.

The entire sequence of movements can be repeated indefinitely. Just keep grabbing the Xs and bringing them out around and under the outer strings. To keep the game interesting, try speeding up the patterns as the rounds.

For more than these variations, check out this video here: