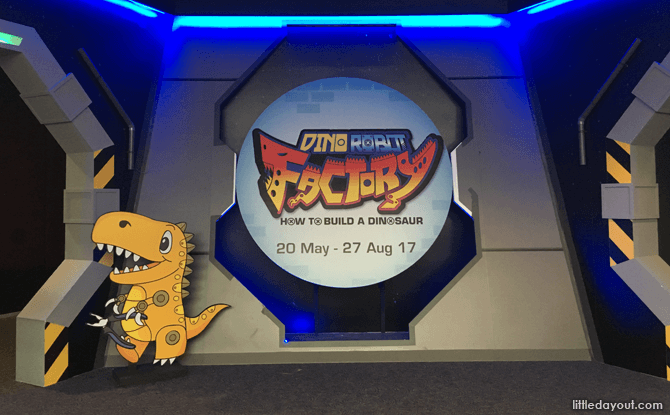 Dino Robot Factory is an exhibition being held at The Annex, Science Centre Singapore from 20 May till 27 August 2017. It allows children to walkthrough the experience of building a dinosaur robot.

The narrative goes as such – Dr H Hoshino is the Plant Manager at the Dino Robot Factory. Visitors to the “assembly plant” will be training to become engineers.

And what exactly does the plant manufacture? Robot dinosaurs of course. Specifically, those of the animatronic kind.

The exhibition is organised around a series of activity stations – a sort of robot manufacturing production line. Howvever, in this case, the robots don’t move from one assembly point to another – the workers do. 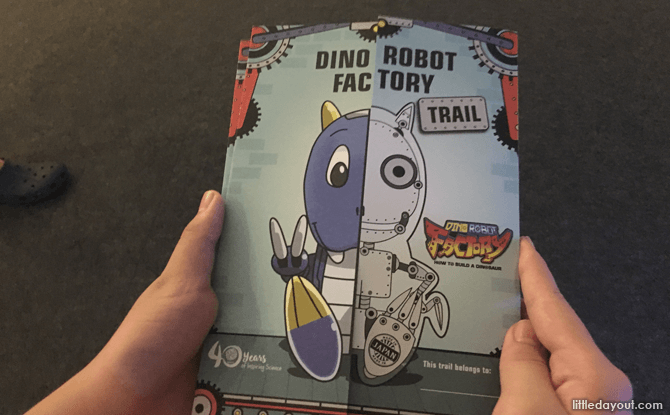 Upon entering the plant, each kid will receive an activity booklet. They can collect stamps on the booklets by finishing each activity station. Once all the stamps have been collected, they can redeem a little giveaway on the way out.

Oh, and if you are at a loss of which station to go to, just follow the alphabets, from A to Z, on the wall. You can even open the alphabet panels to, literally, uncover some dino facts.

Dino Robot Factory begins with an introduction to dinosaurs. 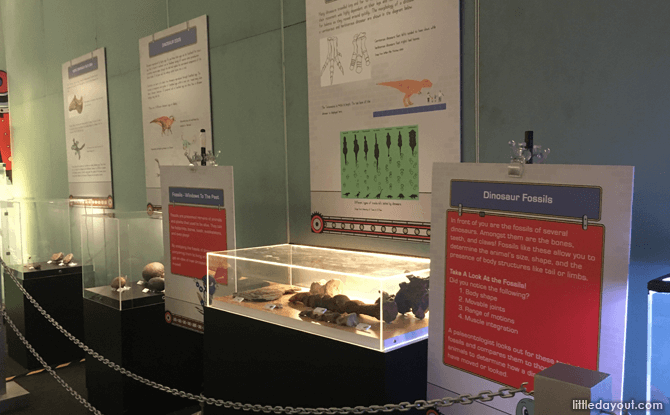 Here, there are exhibits that describe dinosaur features and characteristics. Kids with the necessary patience can study the fossils of the creatures that they will be trying to replicate in robotic form later.

Next up is the design phase. Go to a Mechanical Design Viewer and use a special “scope” to study the secret blueprints of the dinosaur robots the plant constructs.

Once kids have identified the dinosaurs in the Mechanical Design Viewer, they can circle the right answer in their activity booklet and earn a stamp.

SPOILER ALERT: We tell you what dinosaurs they are constructing in the upcoming sections. Next up is the fun part. Kids need to put together the skeleton of the robot dinosaur. It is a 3D puzzle and they have to figure out how to fit the different robot dino parts like legs and arms correctly on a frame. There are two robot dinosaurs to choose from – a Stegosaurus and a T-Rex.

Once kids have completed assembling the dinosaur skeletons, they earn another chop. You get the routine.

Having the frame alone is not enough. The dinosaur is meant to be a robot not a sculpture. Therefore, the next step in the engineering process is to learn how to make the dinosaur move.

At the next two activity stations, kids explore how mechanical robots are animated. At the Robot Inspection Laboratory activity station, step on a foot pump and see a mechanical T-Rex head move. Next, move on to a larger dinosaur model and try using pressing different button to manipulate the whole dinosaur.

Completing the Dino Model at the Factory

With the mechanics out of the way, move on to the activity station where they can finish off the robot dinosaur with “flesh” and “skin”. They will need to fit on outer coverings to complete the Stegosaurus and T-Rex robots. This activity station is aptly named Robot Model Finishing Unit.

That’s not all. There is another station in the Factory where the animatronic dinosaur comes alive.

And this is not any “dumb” robot dinosaur. At this last station, kids can interact with a dinosaur by using body movements. Raise a hand to command it to couch up and down. Raise the other to open and close its jaws. Lurch towards it and it will growl.

A computer next to the dinosaur shows how the visual sensors allow the robot dinosaur picks up and tracks a person’s movements.

By now, kids should have completed their card and can pick up their gift at the counter.

Other Activities Within Dino Robot Factory There are other activities within Dino Robot Factory. These include a sand pit for kids to dig for dino bones, building blocks to build a dino with, and tangram puzzles. One activity to highlight is a dino show that you can view under a dome tent. Under the hemispherical screen, you will be surrounded on all sides by the movie. The movie takes advantage of all-surrounding image to full effect with fast motion sequences that almost make you feel you are on a rollercoaster. Another object to highlight is a little green dragon hiding in a glass case. This dragon is designed to create the optical illusion of its eyes following you around wherever you move to. Give it a try.

There are also chargeable craft activities and dinosaur kiddy rides inside the Dino Robot Factory.

Robot Dino Factory is an interesting approach to introducing basic engineering ideas to kids – without any of the engineering jargon. It is targeted at kids 12 years old and below.

To get the most out of the Robot Dino Factory, get the kids immersed into the different activity stations. Robot Dino Factory is not the type of exhibition you can expect to just walk through. It is very much more an activity-based experience than a exhibition for viewing.

Admission to the exhibition alone costs $7 for children and $5 for adults. You can expect to spend around 30 minutes at the exhibition.