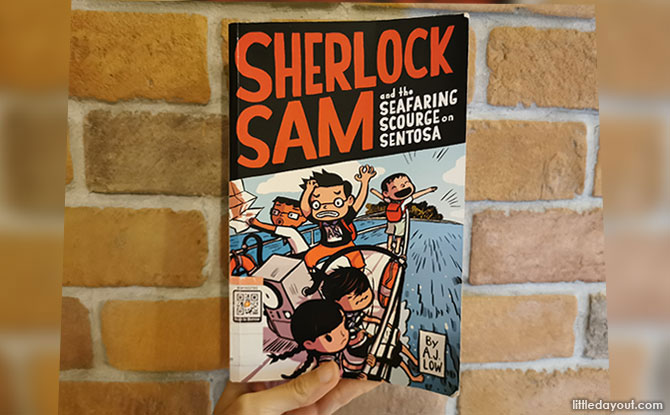 The latest mystery that Sherlock Sam unravels is revealed! Sherlock Sam and the Seafaring Scourge on Sentosa was written in the midst of the circuit breaker and adds to the 15 other books in the Sherlock Sam series. We find out what the latest case is all about!

Each book is about solving a mystery around the world and in Singapore. And guess who are the mystery-solvers? Five children, one robot and their assistants – a few policemen and their parents! Your children will find an affinity to the quirky characters – Sherlock, the main protagonist giving a first-person account, Watson – his robot sidekick which makes deadpan jokes as well as Jimmy who names all his pets Benjamin. Inspector Lestrade from INTERPOL will also delight many with her wacky disguises and hilarious antics.

The mysteries take them to various parts of Singapore as well as cities such as Seoul, London and Tokyo. Readers will gain geographical knowledge as well as different personalities, food and even outdated technology in each book.

Don’t worry if it seems difficult to understand because there is a glossary at the back of each book.

Sherlock Sam and the Seafaring Scourge on Sentosa Book Review

Sherlock Sam and his team “Supper Club” go on a mission to recover Mr Charles Lee’s missing treasures. Their hunt takes them to the different islands of Singapore – lesser known places you might not know of. Ever heard of Pulau Hantu? You will find out in the book.

Just like the rest of the series, the book also includes the use of “not-so-current” technology previous generations might be familiar with such as data on cassette tapes, ASCII, C++ and a dial-up modem. Did you know that cassette tapes can contain more than just audio?

The themes of friendship and loyalty definitely stands out in the book. It takes a team to solve a mystery and the children plus their robot do this splendidly with their different personalities. Even the robot Watson gets into trouble by concealing information to protect the children, as a result Watson gets grounded.

Emotions are also mentioned in the book, particularly that of Eliza’s as she battles a difficult time with her parents’ divorce. Children might be unfamiliar with this and I thought it was something important to raise with readers. Explaining how sometimes things may be difficult be it due to familial conflicts, sibling rivalry can help children to learn how to cope. In Eliza’s case, she found a safe space amongst the “Supper Club” much to her mother’s displeasure.

Sherlock Sam and the Seafaring Scourge on Sentosa also brings up illegal activities such as piracy, the stealing of data as well as material goods. It is a good platform to discuss what stealing means even in intangible terms.

I appreciated how the authors included local tidbits – whether it’s cuisine like soto ayam or Singlish and iconic place in Singapore. It makes the stories more familiar and also gives local readers the opportunities to explore the places mentioned in the book.

Info for Parents and Suitable Ages

The book is suitable for children ages 9 and up. Given some themes which may be more challenging to discuss, it would be beneficial for parents and caregivers to talk them through with the children.

Sherlock Sam and the Seafaring Scourge on Sentosa

My ten year old enjoyed this read and peppered me with questions on the terms that sounded foreign to him. He’s a fan of Sherlock Sam and it’s not hard to see why. Who doesn’t love solving mysteries by a “Supper Club”. Elementary, dear Watson.

Book Bugs Is Having A Community Day, Library Trail & More This Dec