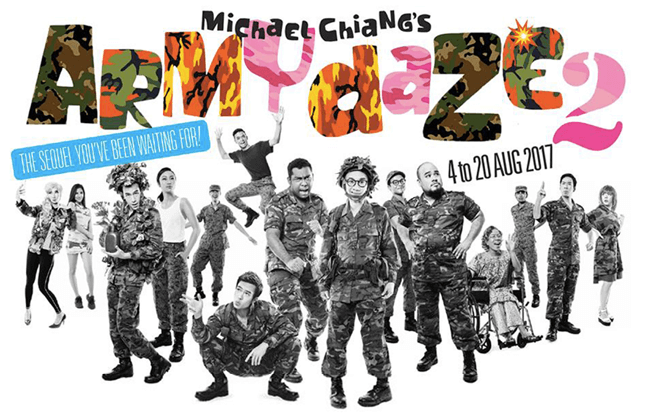 The wait is over.

The all-new comedy catches up with Malcolm Png three decades later: our mummy’s boy is now an SAF regular, serving as Director of Public Affairs. When his son Justin enters national service, it brings back vivid memories of his own experience.

And what of his best buds from Hotel Company, 1987?

The five meet up after three decades for an unforgettable get-together, filled with hilarious surprises. Even after 30 years, the spectre of CPL Ong continues to haunt them, appearing at (disturbingly) regular intervals of the story.

Running parallel with Malcolm’s story are the adventures of his son Justin and his BMT mates Donovan, Zai and Kuan Yew. Adding spark is Renee, the spunky girl they all wanna call their own.

While Malcolm and friends confront mid-life crises, son Justin and gang cope with the romantic confusions – what would life be without mayhem, melodrama and music?

Featuring a brand new script by playwright Michael Chiang, Army Daze 2 will be directed by Beatrice Chia-Richmond and showcase original songs by Don Richmond. All three worked on the 25th anniversary production of Army Daze (2012, 2013).