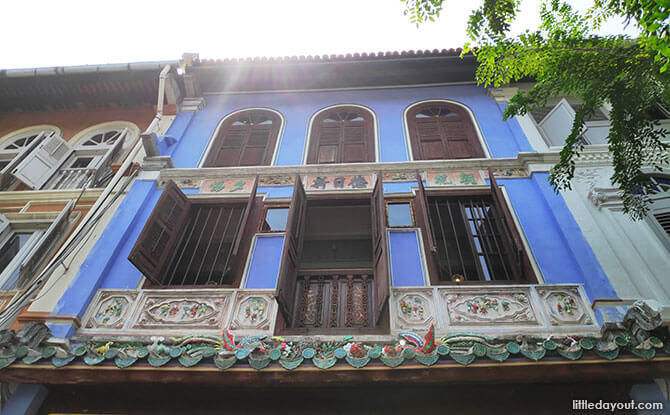 Look no further if you would like a peek into a traditional Peranakan ancestral home. Singapore has a beautifully restored Peranakan mansion, right in the heart of the city. NUS Baba House at 157 Neil Road is a residential terrace house built in the late 19th century by a rich shipping Tycoon Wee Bin. It was restored through a collaboration between URA, National University of Singapore’s Department of Architecture and Southeast Asian studies programme.

The house was actually left vacant for a few decades before a generous donor funded the project, thus re-awakening the soul of the Wee ancestral home.

Just like the rest of modern Singapore, most old things in the way of development would often be bulldozed away for glitzy facades. Fortunately for us, we have a chance to peek into a slice of history – made possible by Ms Agnes Tan, daughter of prominent Baba Tun Tan Cheng Lock.

With Peranakan Museum closed for renovation for two years till 2021, it is an opportune time to learn more about Peranakan culture and the history of the Wee family at NUS Baba House.

The docent-led tour is most suitable for children ages 12 and up as the rich sharing from the guides might enthuse only those who are keen to learn and listen. Those with younger children may wish to visit on Saturdays when there are four entry timings which allow families can explore the house at their own pace on a self-guided tour. 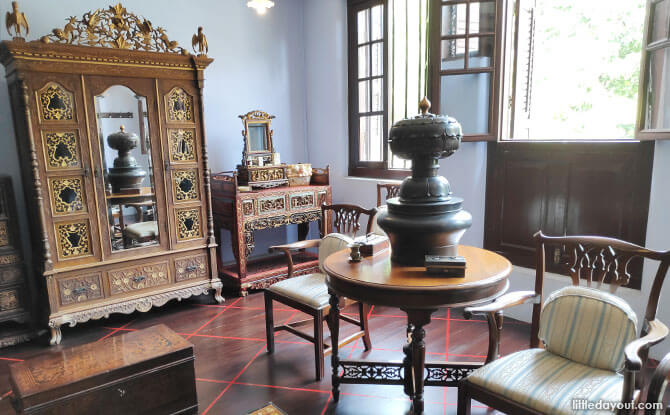 NUS Baba house has three storeys with the first two restored as closely as possible to the Wees’ original home, while the third floor is dedicated to an exhibition space for artefacts and interpretive displays.

Given the large amount of detail dedicated to the restoration project, the team behind 157 Neil Road was focused on retaining the physical integrity and original spatial qualities of the house.

Even the recipe for plastering has been tediously experimented with so as to emulate the plastering used in the past, which seems to hold up way better than commercially available types. Layers of paint have been scraped off the walls to uncover the original colours so the house could be painted as such. In addition, extensive research work and an archaeological dig was carried out to guide the team on the choices of final finishes, colours, materials and decorative schemes. 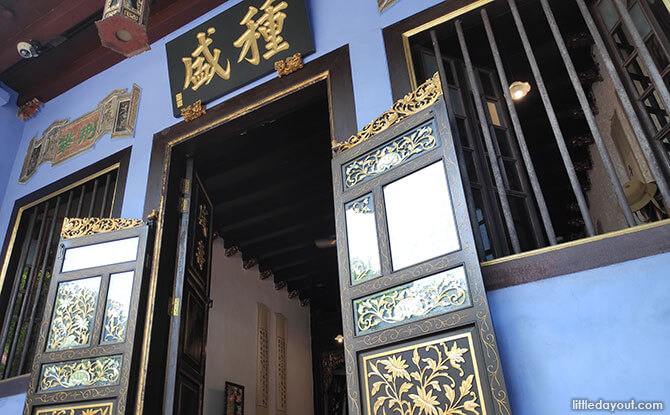 All auspicious symbols are used to usher in the best of life’s fortunes – the phoenix representing prosperity, the crane representing harmony and peonies representing abundance and fertility. Artisans created these using jian nian (cut and paste) technique where coloured cermaics were pieced together to form 3D figures. The typical Peranakan home has an intricately-carved Pintu Pagar, which served as a privacy screen for the entrance which also allows airflow, as the walkway in front of it was accessible to public. 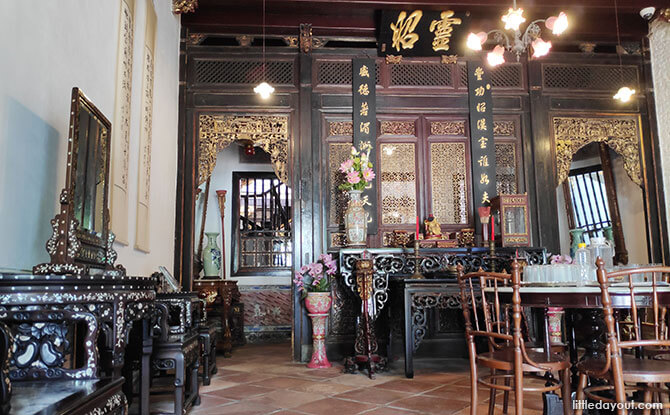 Guests would be ushered to the Tia Besar – door in Hokkien, big in Malay, also known as the main hall for visitors. As this room was where business dealings, negotiations and arranged marriages were discussed, the furnishing usually reflected the family’s standing. We sat on the blackwood chairs, in-laid with mother-of-pearl and marble pieces carefully chosen to reflect that of a Chinese painting of mountains and rivers – also auspicious symbols of power and wealth.

Marble also had a cooling effect which made the seat more comfortable in the tropical heat. The first of the altar also greeted visitors showing that the Chinese Peranakan family stayed close to worshipping its Taoist deity Guan Gong who reminded all present to act justly and righteously. 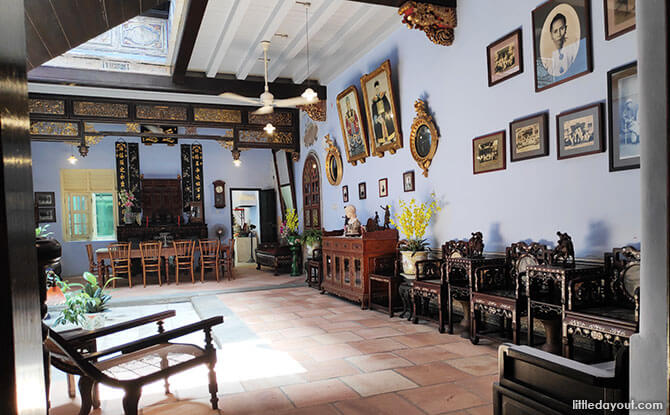 If you are a close friend of the Wee family, you are likely to enter the private area of the home marked by a larger space, family portraits, the tok panjang (long table), an ancestral altar and an airwell for ventilation and light. This part of the home just takes my breath away. Just imagine family members chatting intimately, tok panjangbeing laid with colourful ceramic plates and classic Peranakan dishes. During important festivals, 12 different dishes would be laid out for the ancestors’ feast which would be presented on the tok panjang table. 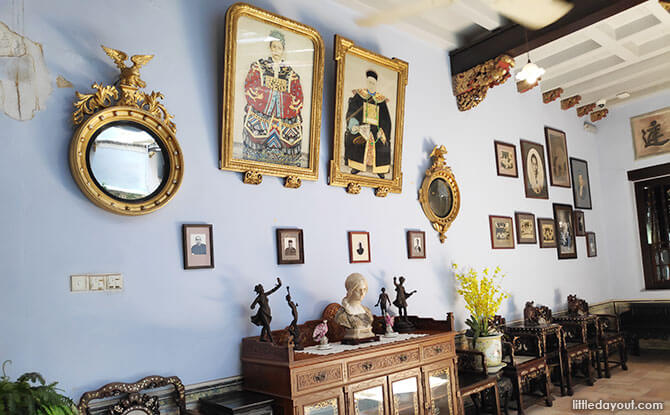 The wall with family portraiture is the main feature of the home. As the faces in the portraits give you silent stares, you can see which period the family members lived in. Wee Boon Teck’s portrait is placed next to his mother’s, you can see his court official status very clearly and a sign of his opulence as the ranking was most likely purchased from corrupt Qing officials. His father Wee Bin’s portrait, which was placed behind the ancestral altar, unfortunately couldn’t be salvaged.

The hall is also flanked by a pair of piak tu also known as wall cupboards in Baba Malay containing delicate, expensive ornaments and crockery. The second altar is focused on ancestor worship, where ancestor tablets are placed. Do note that the wash basin is for “ancestor spirits” to wash themselves in and not for ordinary beings! 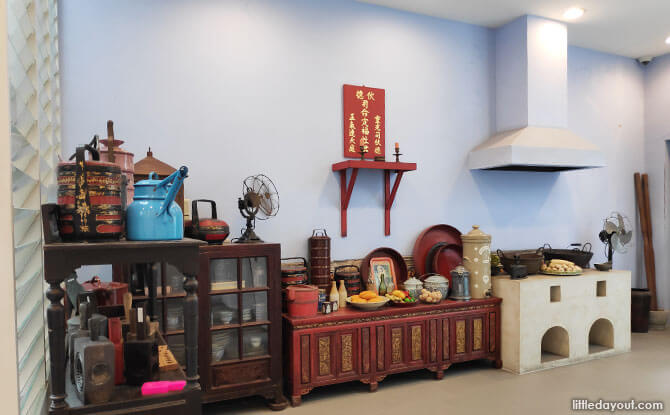 Next, we entered the kitchen where an altar for the Kitchen God was placed and saw the various tools used for cooking the elaborate Peranakan dishes including the mortar and pestle, ang ku kueh mould, various cake moulds and whisks. According to Donald our docent, matchmakers often hung around to listen for the correct pounding of spices to see how adept the Nonyas were to determine their culinary skills!

After a brief kitchen tour, we proceeded upstairs to the bedrooms of the matriarch and bridal chamber. A new staircase and lift were built to help visitors get upstairs so the original staircase would be preserved for a longer time. The lift is especially useful to the older folks who may have mobility issues. 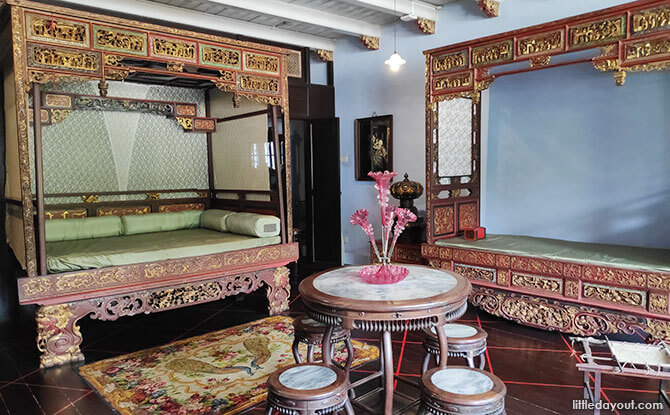 Bearing in mind the stature of the Wee Family in the 1920s, they were the elites who could spend on the most lavish items often Western luxuries such as gramophones, four poster beds and writing desks. As NUS Baba House has undergone several rounds of renovations, including a two-year revamp, furniture has had to be moved for storage. The bedframe of the chrome four poster bed alone needed three men to navigate it. 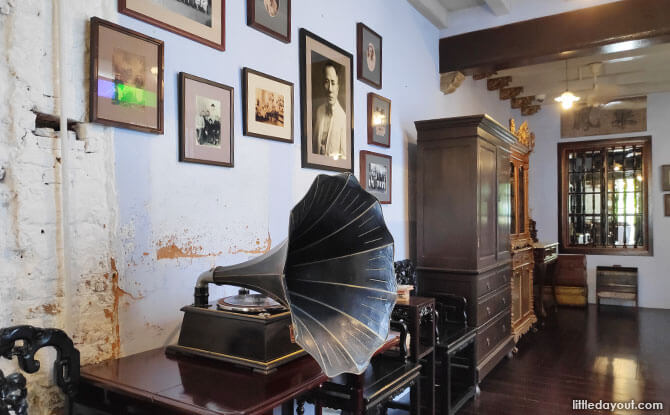 As you enter the bridal chamber, get mesmerised by the ornate carvings on all the furniture and various décor. The beautiful teak four poster bed had carvings of flowers, gourds and also butterflies which also meant love and fertility. When dressed in silkscreens during the wedding, the bridal bed would have bells hanging down from the sides which are meant to alarm anyone if the bride attempted a runaway. 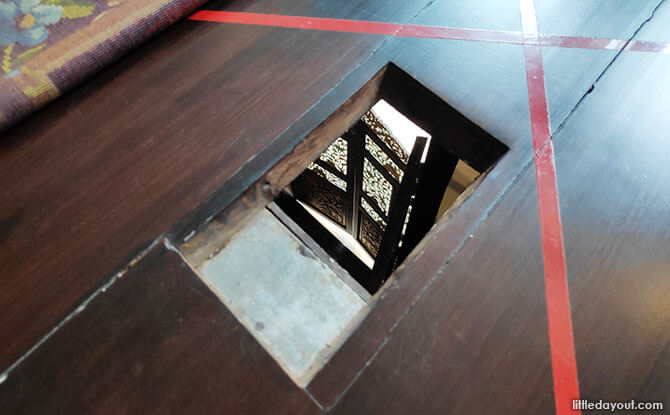 Look out for two peepholes the Nonyas would have used to check out potential suitors or unwelcome visitors! One is hidden right underneath a carpet. 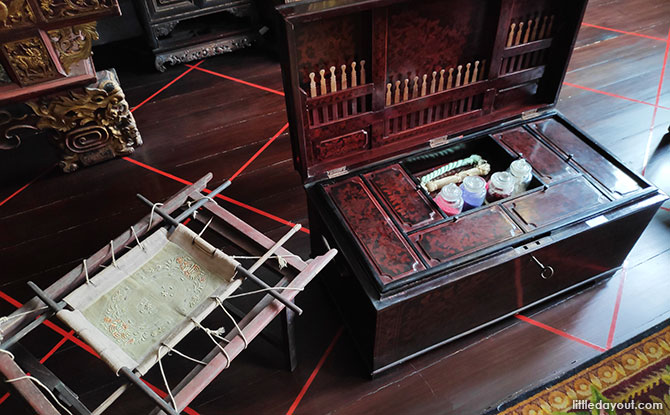 Aside from learning the skills for making Peranakan food, Nonyas of good breeding must know the intricacies of beadwork. A wooden chest typically kept all the microscopic beads, gold thread as well as other materials. There were many storage places for the typical Nonya dressing – the baju Panjang pinned together with three brooches known as kerosang. The more intricate and precious the kerosang, the higher the stature of the Nonya. 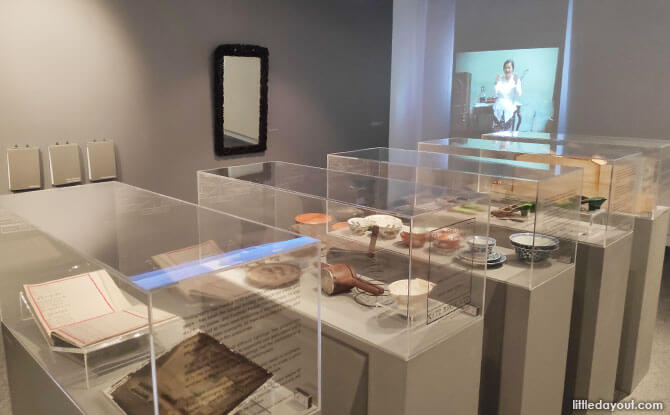 Not only is NUS Baba House used for visits and the education of Peranakan culture, it is used to demonstrate the conservation of old homes. Hence, the gallery space contained many materials and research used in the restoration work of NUS Baba House as well as audio interviews with the descendants of Wee Bin. Apart from these, there were various artefacts on display including finds from an archaeological dig done in an airwell. 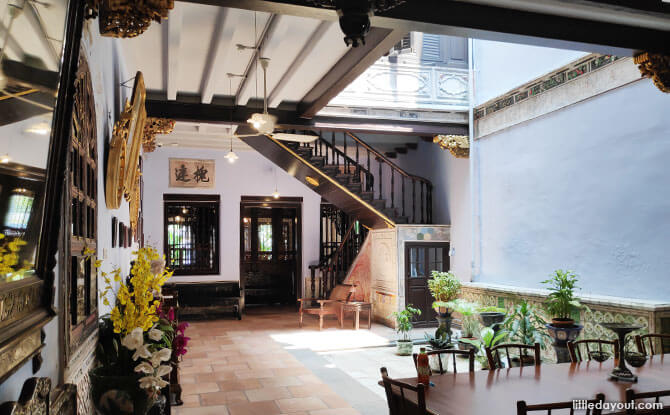 The visit to NUS Baba House was a highly enriching experience to anyone who would love to know more about Singapore’s past and cultural history.

Families with children should take note of Saturdays at the NUS Baba House when it opens its doors for ExploreHours. There are various thematic programmes held in conjunction with these self-guideed visits and families are able to explore the house at their own pace.

Entry for Singaporeans is free if the code “CONC” is used upon purchase of the ticket, pre-booking is recommended as each tour group has a maximum capacity of 15 people.

Do note there is no photography in Baba House (we got special permission for the purposes of this story), this helps visitors to focus on the tours. While it was not possible for a guide to cover all the intricacies in a one to one-and-a-half-hour tour, visitors can also purchase a book all about NUS Baba house in greater detail.