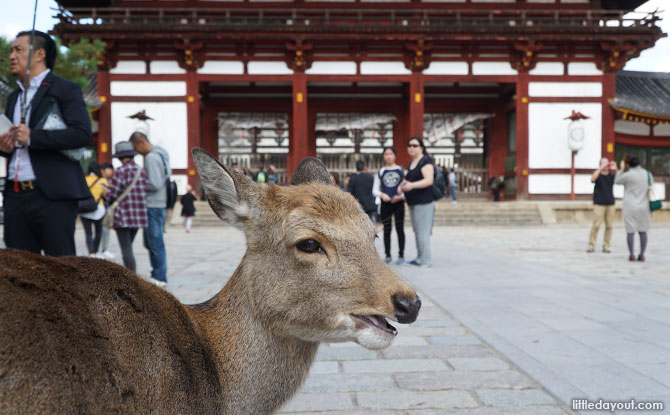 Around 30 km away from Osaka, Nara is easily accessible from Japan’s second largest city. While on vacation with the family in Osaka, we decided to take a day trip to Nara to explore the city and see its famed deer.

By Train from Osaka to Nara

From the Umeda district in Osaka where we were staying, it was a quick ride on the train to Tanimachi 9-chome Station and 350-metre walk over to the Osaka-Uehommachi Station where we caught the Kintetsu-Nara Line to Nara. 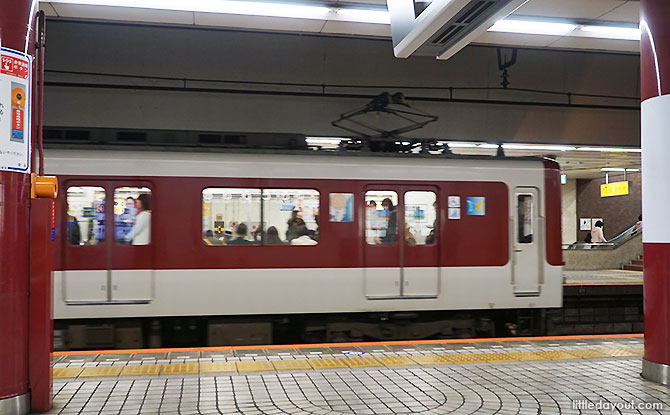 There are several types of trains available on the Kintetsu-Nara Line – the local, the limited express and the express. We took the express train so that we wouldn’t have to endure the train stopping at every station on the way from Osaka to Nara. 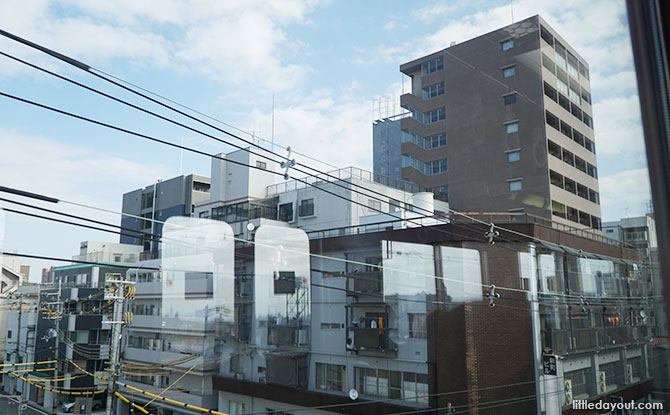 Arriving at the underground Nara station, we made our way up the escalators to the street level. From the top of the escalators, it was straight on to get to Nara Park, or a right turn to head down a covered shopping arcade.

Nara is renowned for its free-roaming deer which is a symbol of the city. Where can you find them? At Nara Park. 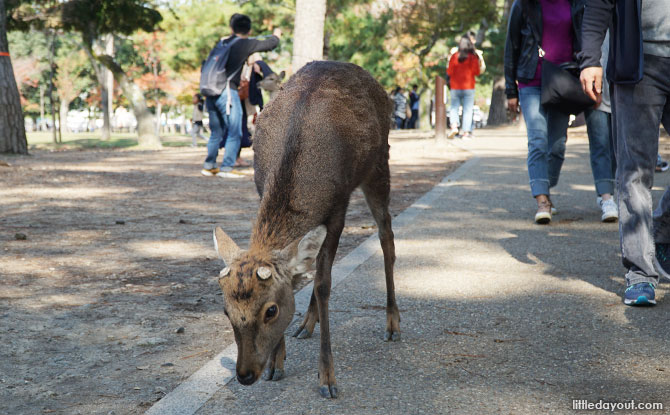 We followed the throngs of crowds trekking towards Nara Park and it wasn’t long before we came across our first deer of the day. There was plenty more to come.

Why are there so many deer in Nara? The animals were believed to be messengers of the gods and, at one time, it was even punishable by death to kill a deer. 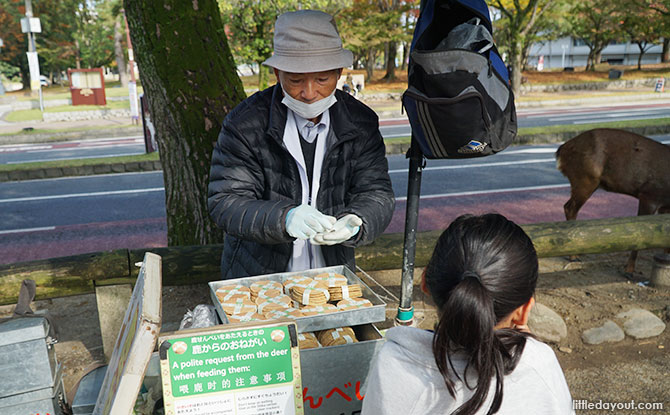 Street vendors located throughout Nara Park sell deer crackers or shika senbei. These round-and-brown crackers are made from wheat flour and rice bran, for the well-being of the deer, without any sugar. 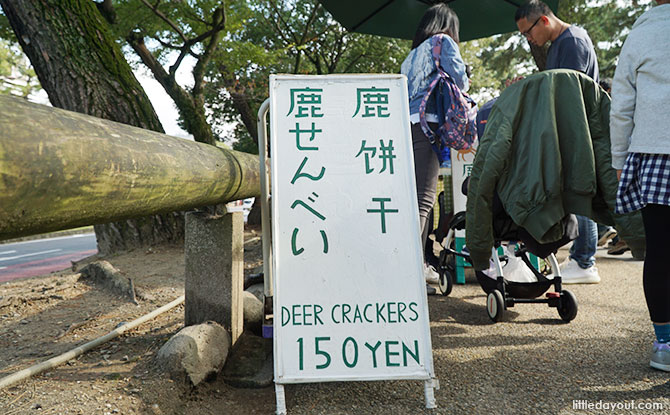 Costing 150 yen for a stack, they are a favourite of Nara’s deer. This is apparent from the hordes of deer that quickly gather around anyone looks as if they had some shika senbei.

Food in the Park 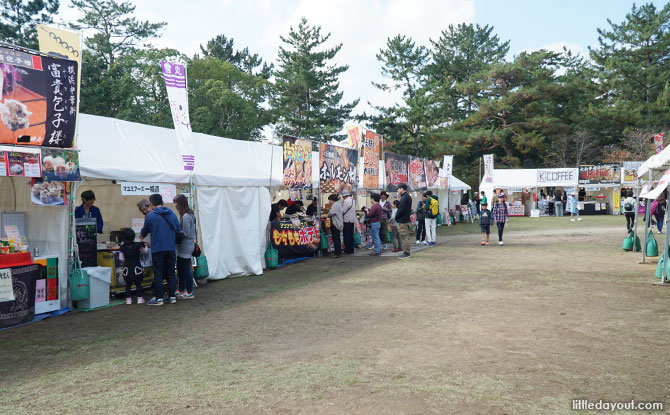 On the day of our visit, there was a food fair being held at Nara Park. 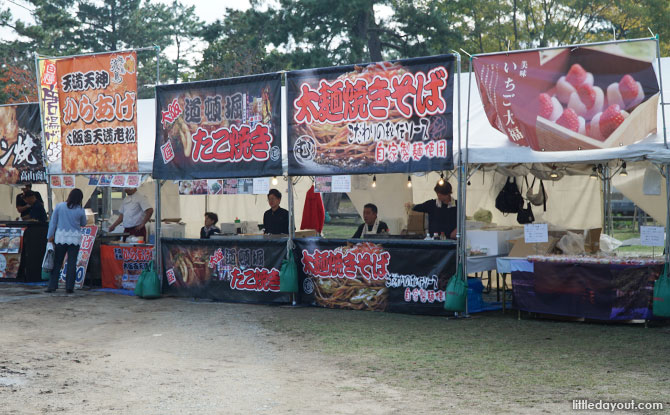 With a line of food vendors and an eating tent, we decided to feed ourselves first before feeding the deer. Gyoza, mochi, hot chocolate went down well on an autumn morning.

Tummies filled, we picked up some shika senbei to feed the deer. 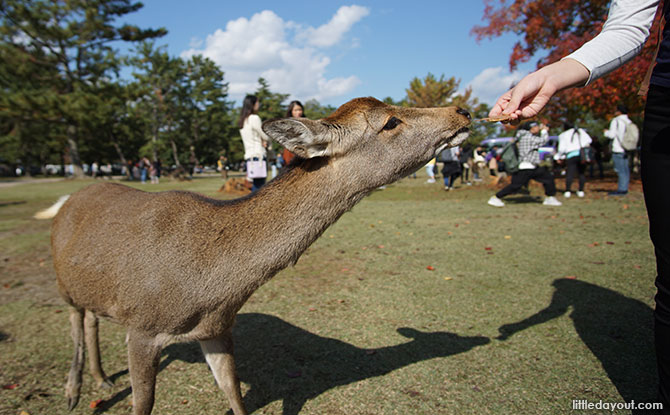 Feeding the deer is a definite must-do activity in Nara. However, don’t let the deer’s cute demeanour fool you; they can get quite demanding when it comes to their favourite crackers.

We also found out that deer eat anything. As we were standing around with a map from the Tourist Information Centre, a deer came up to us and took a bite from our map. We tried to take it away from the deer but the creature refused to give it up and carried away chomping at our map.

The expansive Nara Park is also home to several of the city’s major attractions. Thankfully, most of these attractions are located relatively close to one another – and can be found even without a paper map.

We made our way past the Nara National Museum, heading onwards towards Nara Park’s most famous attraction, Todaiji Temple, which was constructed in 752.

Along the way, we came across the Okumura Commemorative Museum. This tiny museum cleverly advertised itself as a free rest-stop and offers free tea. We took the bait. 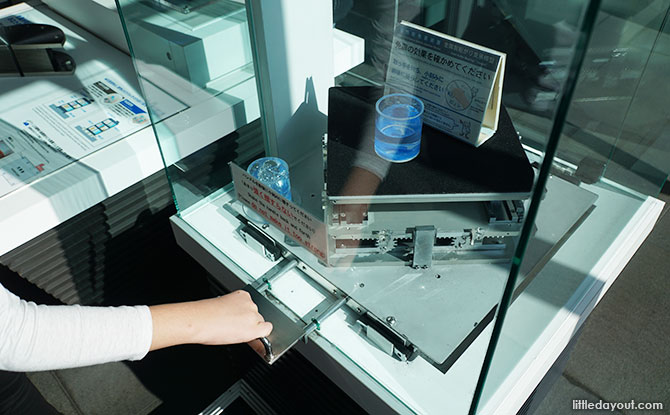 Inside, besides the tea and some seats for a rest, there are a handful of interesting exhibits on the construction company Okumura Corporation and how buildings are kept earthquake-safe.

The rear of the Okumura Commemorative Museum had an exit which we discovered was a short cut to the Todaiji Temple.

The Todaiji Temple is a large Buddhist temple. It is listed as a UNESCO World Heritage Site and is one of the world’s largest wooden structures. 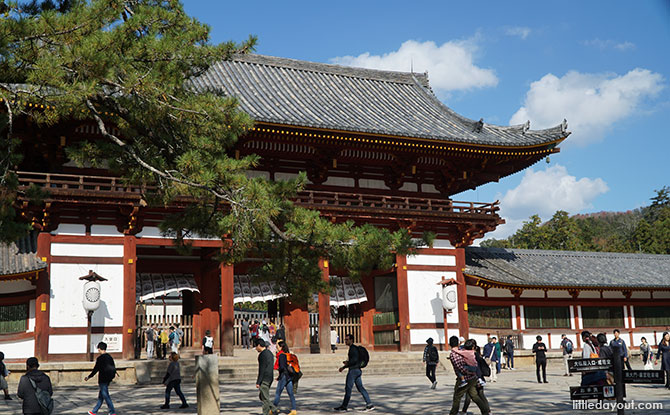 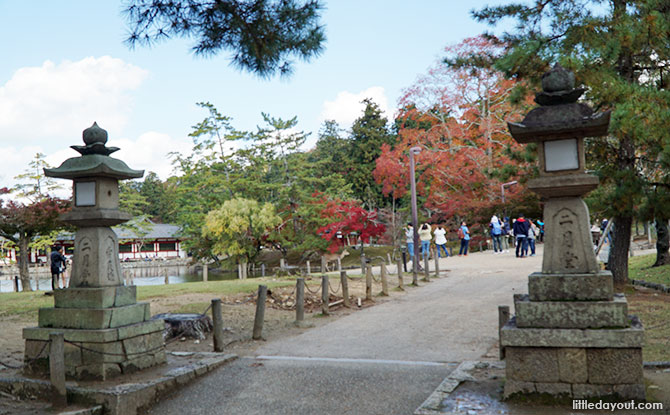 The grounds around the temple were especially pretty in the autumn colours.

From Todaiji Temple, we decided to take the road that skirts Nara Park rather than back track past the throngs of tourists.

This route led us to Isuien Gardens. This is a traditional Japanese landscaped garden which requires a ticket to enter. While we didn’t want to pay the fee to go into  the Gardens, there was a traditional tea house where we did want to stop for tea. Unfortunately for us, the tea house was full and we had to move on.

Soon, we found ourselves back in Nara Park where we could go back to viewing the more sights. 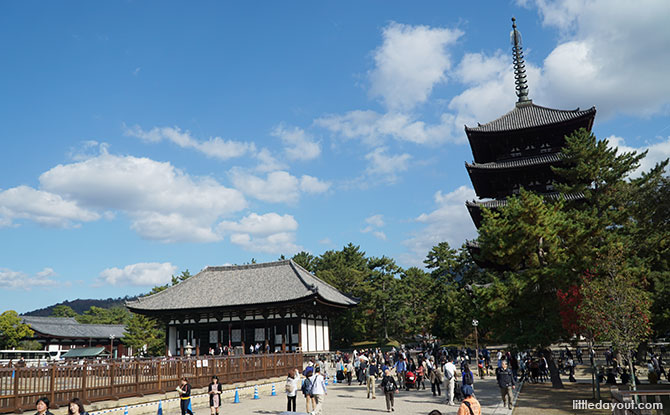 Kofuku-ji Temple is a Buddhist temple which opened in 710. Standing tall beside it is the Kofujui Five Storied Pagoda. 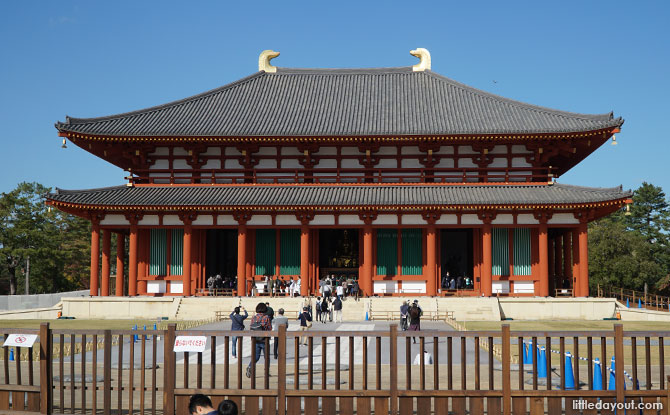 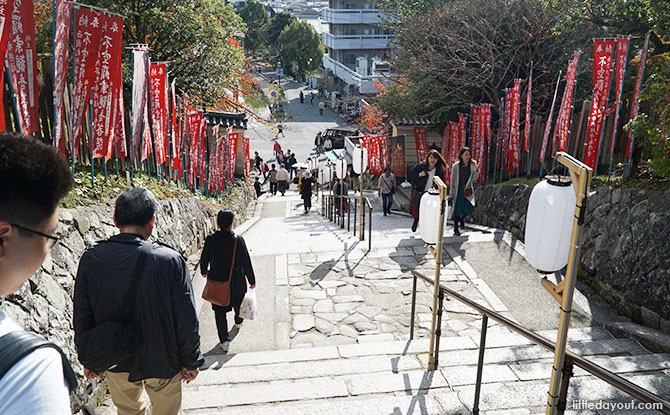 Next to Nan en-do Kofuku-ji, a set of stairs led down to Sanjo Dori and into the urban shopping streets of Nara. 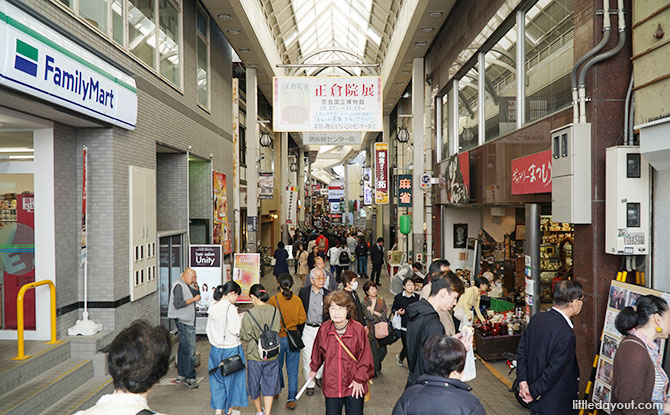 These covered arcades are lined with shops selling everything from confectionary to kitsch souvenirs.

One store we particularly wanted to seek out was a confectionary selling freshly-made mochi. We didn’t have to look far. Not long after entering the Nara shopping area, we heard a loud thumping sound, repetitively beating away like a drum.

Located at the corner of Sanjo Dori and Mochildo-no-center-gai, Nakatanidou is a sweets shop that throws in a performance for its customers. 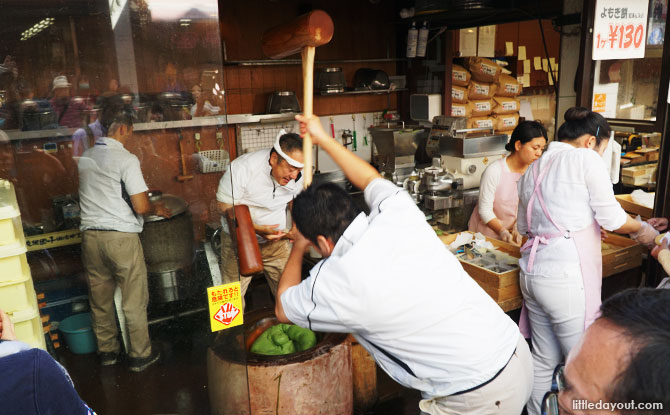 We watched as two men swung heavy wooden mallets at a wooden mortar, pounding away vigorously to make mochi. The spectacle drew a large crowd. Once the pounding was over, the mochi was thrown into an extruder which formed perfectly shaped balls of mochi. 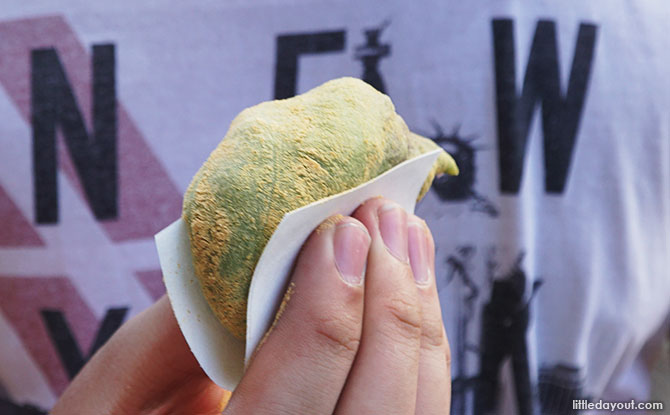 Filled with red bean paste, the freshly-made mochi was warm from the pounding and ever-so-soft.

From the Nakatanidou shop, it was a short walk down the store-lined Higashimuki Shopping Street, past McDonald’s, to return to the Nara train station. Along the way, we stopped for lunch at a sushi conveyor belt restaurant which had beef sushi – something we had never come across before.

Done for the Day Trip to Nara

We had set off from Osaka for the day trip to Nara at 8.30 am in the morning and by the time we were done with our sushi “lunch”, it was 2.30 pm. As we had had our fill of Nara’s sights and experiences, we headed down the escalator at the station to the trains and off to our next adventure.

READ: Osaka Museum of Housing and Living – Step Back in Time 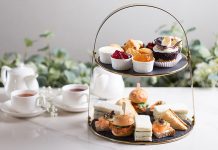 Our Favourite Videos Of 2019